At the Chorlton Beer & Cider Festival, we were delighted to welcome the 1000th & 1001st member of Trafford & Hulme CAMRA.

Kelly & Aleks signed up to the campaign as joint members at the festival completely unaware that the branch sat on the precipice of the milestone in our membership. 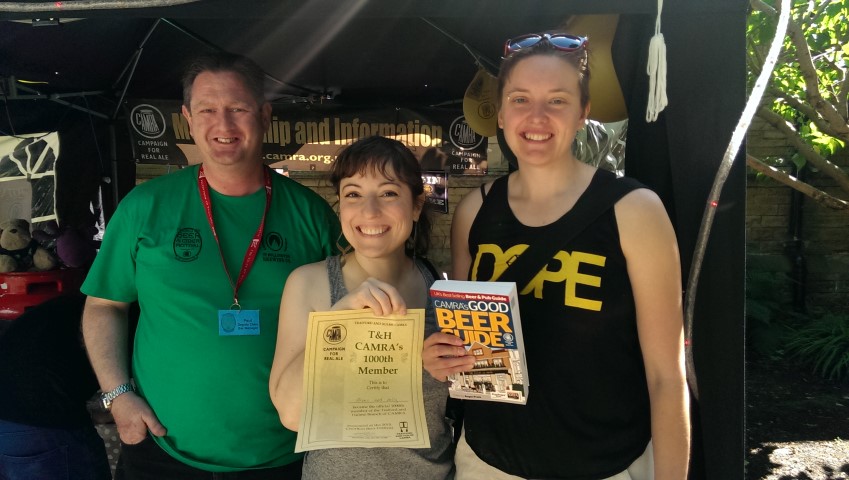 Branch chair Paul King rushed from working on the cider bar to welcome Aleks and Kelly as the 1000th & 1000st members. They were presented with a special certificate, a copy of the Good Beer Guide and a voucher for beer to be spent at the festival.

As regular Branch meeting attenders will know there has been much discussion over the past couple of years or so about how the City Centre of Manchester is supported by its local CAMRA Branches, and how consistent support is to our City Centre pubs and bars.

There has been much discussion and consultation, and lots of confusion on what cannot and can be done from a CAMRA prospective, with members of the National Executive themselves contradicting each other.

Part of this discussion has been around what is needed to set up a new CAMRA Branch, and as part of this a group of CAMRA members have come together to propose and be the founding committee of a potential City Centre Branch.

Currently the City Centre is covered by three existing Branches – North Manchester, Stockport and South Manchester, and ourselves. The formation of a City Centre Branch would have a major effect on us as a Branch and as part of the process of proposing to set up a new Branch, the prospective Branch Committee is required to consult with the affected Branches and to consider the results of that consultation in coming up with a final business plan for the consideration of our Regional Director and the CAMRA Branches
Committee.

This Consultation meeting has been set for Tuesday 12th May at 8.15 at the Waterhouse in Manchester, a pub which if the new Branch is set up we will lose as a Trafford and Hulme pub.

CAMRA Members’ Weekend, featuring the National AGM and Conference, is where our members discuss our future policy and direction. The weekend also offers the opportunity to members to socialise with friends, visit recommended pubs and go on organised trips.

The Members’ Weekend is open to all CAMRA members and will be held at The Albert Hall, Nottingham on 17th-19th April 2015.

Closing date for pre-registration is Friday 20th March 2015. Please note that joint members will need to login and register individually.

For more information and to pre-register, visit http://camraagm.org.uk/

If you miss the pre-registration deadline - don't worry, you can still attend and register in Nottingham on the day.