IS THE TRAFFORD & HULME PUB OF THE YEAR

Scott Davies thought he had done well when he and his team were told that they had been named the Trafford & Hulme Pub of the Season, Spring 2009 but he was not expecting to be named the Pub of the Year for the branch aswell.

This bar has been built into the railway arches at Deansgate, opposite the original Knott Mill station (now known as Deansgate station). This bar serves an excellent range of Marble beers and other local micros with the odd, very welcome and unusual micro beers from around the country.

Besides having a fantastic atmosphere, which is ever changing depending on the time and day of your visit, this bar does the most wonderful food. Their ‘head of the kitchen’ is Oz. A very talented and passionate man about his food, his team and his kitchen.

The Knott hold a Epicurean evening every third Tuesday of the month, where for £10 per head you are treated to various delights by Oz and his team with beers matched up to the menu.

If Cask Conditioned beer is not really your scene, then you are also tempted by a range of cask and bottled foreign beers and ciders.

The branch will be presenting the Award on the evening of Wednesday 20th May from 8pm. Please come along and support Scott and his team and enjoy some treats from Oz too.

Commiserations must also go to our two runners up who were the City Arms, Kennedy Street and the Old Market Tavern, Old Market Place, Altrincham. 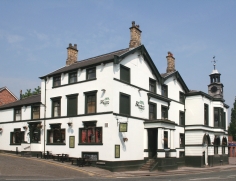 There was only 1 point between these two pubs showing just how close a competition it was this year for our Pub of the Year.